The Two Sides of Rich Bloch

Rich Bloch is a 60-something labor arbitration attorney, serving most notably as a neutral arbitrator for the National Football League and other professional sports organizations.

Rich Bloch is also a professional magician and a performer.

Both things are true. Bloch likes to keep the two things separate. He does not do magic tricks for 300-pound linemen and their agents.

Nor does he bill himself as a lawyer-magician when he’s performing at the Woolly Mammoth with his show “Best Kept Secrets,” where story-telling, humor and performance blend with Bloch’s finely honed magical abilities and, for want of a better phrase, bag of tricks, which includes card tricks, the famous Harry Anderson’s Last Monte, the world’s fastest tricks, and the assistance of his wife Susan, who is actually a Georgetown University law professor.

“To me, they’re two different worlds, they really are,” Bloch says. He and his wife live on Cathedral Avenue. He has two grown children, both of them attorneys. Also present are a number of pets, cats, a sheepdog, and a giant macaw who reportedly does card tricks.

“Both of the things I love to do — being an attorney, practicing the kind of law I do and being a magician — have enormous rewards, but you can also get frustrated. When that happens, you just pass through a door and go into the other world.

“I simply tell people that 80 percent of my professional life is being an attorney, and 80 percent is being a magician.”

Bloch has been a practicing — and it takes enormous amount of practice, too — magician for several decades, and done well at it. He’s highly respected in a boundless community where magic and all the stuff that goes with it — tricks, equipment, professional secrets, show business and uniforms — are an important part of life. He’s performed on cruise ships, in Las Vegas and regularly at Hollywood’s Magic Castle, where he’s been a five-time nominee as Stage Magician of the Year.

Bloch first got interested when he was seven, which was in New Jersey in a time when cities and towns had magic shops. “I was seven, my father had passed away, and my mother, a remarkable woman, was on the road a lot as a traveling saleslady,” he said. “There was this shop on the corner, and it was a fascinating place, run by this old man, and, because it seemed I had to, I said to him you’ve got to hire me as an assistant. He said, ‘what kind of experience do you have?’ And I said, experience, I’m seven. But then, I remembered I had heard about a magician named Ted Collins, so I said my dad was Ted Collins. He said, ‘that’s impressive,’ and he hired me. And I was walking out, so I asked him his name, and he said, ‘Ted Collins.’

“It’s a very special world,” he said. “But it’s more than just tricks and mystery. That’s once reason I’ve been doing this hour and a half show, that’s what it is. And that’s a different world.”

The Woolly Mammoth Theater is known for its edgy new plays, and draws a very different sort of audience than might be found at magic shows. “It’s a challenge, but that’s what I wanted to do, to entertain, to perform, to involve people in the magic show,” he said. “I love the small space, the intimacy and how you can interact with the audience, make them part of the show. I don’t do huge illusions, you can’t, but I do a varied repertoire of magic. I have a lot of equipment, and I wear a white tuxedo suit, one with a lot more pockets than most suits.”

In conversation, Bloch is self-deprecating, funny, really smart about his two roles and about magic in culture. He’s given considerable thought and feeling to what he does, and what a magician does.

“There is a difference between tricking people, deceiving them, and in creating illusions, moments of make-believe that seems real because it is,” he said.

“Best Kept Secrets” will be performed at the Woolly Mammoth Laboratory Theater March 31, April 1-4 and June 9-13. 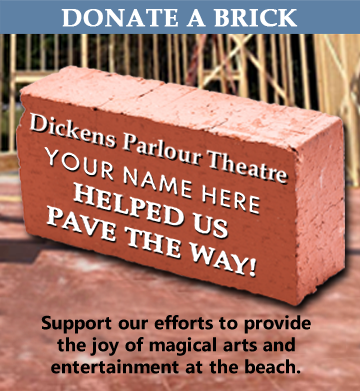 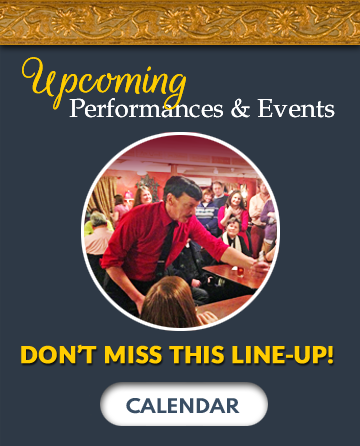